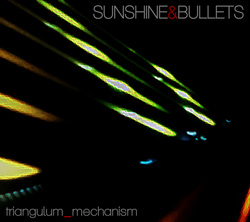 When Sunshine & Bullets released the lead cut from their newest album, Triangulum Mechanism, I knew right from the bat that this was going to be one hell of a special album. In addition to having some killer music and a great melody, the vocals had me floored. They were so powerful and expertly crafted, trading between the male and female vocalist and weaving in and out of this amazing tune. When the full album was finally released earlier this year, I knew I was listening to possibly one of the best albums to be released this year.

In addition to the amazingly strong lead cut, this album so much more killer material. Musically this band is absolutely stunning, writing songs with beautiful melodies, plenty of crunchy guitars and a rhythm section that would rival any band. When you add in vocals from two of the best singers I have heard in a very long time, “Triangulum Mechanism” is an album that deserves many repeated plays.

Songs like the driving “Down”, the hard hitting “Don’t Fade Away”, and the bombast of “Time” show this band stretching out and out doing any band in the hard rock genre. On the other side of the coin, there are a slew of powerful melodic hard-rockers like “Don’t Fade Away”, the emotionally charged “Feel Good”, and the simply stunning “The End”, that prove you don’t have to trade melody for a heavy tune, but can perfectly marry both worlds.

By the time the album closes with “The Mechanism”, one of my new all time favorite instrumental tracks, it’s clear that this band is destined for greatness. Not only are they experts on their respective instruments, but the vocals being traded off between the male and female voices are simply astounding. This is an album that only gets better with each listen, and is sure to be another top ten for 2014.