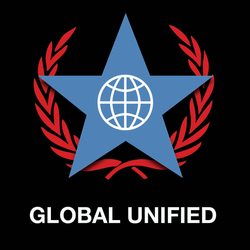 A good concept album is hard to find. There are a lot of them, but the bulk of them aren’t really talked about as much as they should be. Sure you have the obvious ones (“Dark Side of the Moon”, “The Lamb Lies Down On Broadway”, “Operation: Mindcrime), but far too many of the great ones seem to slip through the cracks. The good thing is that more of them are coming out all of the time, and the first album by the band “Global Unified” is a fine example of the concept album.

The story itself is a very cool one. In the future the global government is keeping a very close eye on the citizens of the world as the living conditions of the people get worse all of the time. The government use bird-sized drones, manufactured by dissenters, to police the world. The only hope for humanity rests in the hands of a man who finds an ancient musical device with vibrating wires. It’s an amazing concept, and the music is phenomenal.

This is an album that is hard to classify genre-wise. There are just so many types of music touched on with this disc, that it would be impossible to categorize the disc. The first couple tunes start the disc in very fine fashion, “If I Were A Drone” has a ballsy edge to it, while “When I Was A Young Boy” has more of an alternative kind of sound. “U Won’t Feel A Thing” reminds me a bit of 90’s Rush, but much heavier. Such a killer guitar solo in this song, one of my favorite pieces on the album.

Other highlights on the disc include the somewhat brief, but brilliant breather “Desert Soliloquy”, my personal favorite track “Enemies List”, the crunchy, almost metal, “Globalist Death Camp, the beautiful “In My Sleep” and “Achilles” (with a blistering guitar solo that just screams Lifeson at his best), and the phenomenal instrumental tune “Drones At the Gates of Dawn”.

The press release for the album says the tunes sounds like artists such as Neil Young, David Bowie, Beck, Rush, Dinosaur Jr., Urge Overkill, Duran Duran, and the Police. The amazing thing is that I hear every one of these influences, but so much more. The best part is that there is a sound that is all Global Unified. A very cool mix of these bands, but something so fresh and breathtaking.

This disc is full of melody, crunch, and amazing musicianship. With so many songs to listen to, the album really lends itself to flush out a very cool story, that seems to reveal itself more with each repeated listen.
Purchase